The following text and historical information are excerpts from

A great deal of interesting information and anecdotes about unusual working fluids and much else can be found in The Museum of Retro Technology at http://www.douglas-self.com/MUSEUM/museum.htm. (retrieved on June 24th, 2013).

No claim is made that this short summary of the history of ORC technology is exhaustive and anyone is invited to contribute information.

William J.M. Rankine developed a complete theory of the steam engine in his famous manual of 1859. However, as early as 1825–1826 Thomas Howard built an engine using “alcohol” or “ether” as working fluid. Various authors refer to it and provide a description. It appears that the engine, with a design power of 24 hp (about 18 kW), worked for a brief period in Rotherhithe, Surrey, UK.

On January 9th 1885, the British journal The Engineer published an article that describes the results of a test carried out by a commission of the US naval engineers on a launch engine. The engine used as its working fluid a solution of water and methyl alcohol (with 5–15 % methyl alcohol). The commission made a rigorous comparison with the performance of the same engine in case steam was the working fluid. This test showed that the specific fuel consumption of the engine was 5.07 lb of coal per hourly horsepower if the mixture was the working fluid, while the specific consumption was 5.76 lb of coal per hourly horsepower in case the engine was operated on steam. Given the market price of methyl alcohol and the excessive leakage of fluid from the engine, the economic results were decidedly unfavourable for the binary-mixture engine. A subsequent engine, of greater power (150 hp, compared to the 10 hp of the prototype), did not work at all, due to the distillation of methyl alcohol in the boiler and the uncontrollable leakage of nauseating fumes.

Around 1850, Du Tremblay,  an engineer from Lyon, developed a binary (or cascading) heat engine using steam in the high-temperature engine and “ether” (probably diethyl ether, much more volatile than water) in the bottoming machine.  After evaporation in the boiler and expansion in the cylinders, the steam released its thermal energy of condensation to the second engine, causing the evaporation of the ether which, expanding in another cylinder,  produced additional work. This type of complex engine was installed in several passenger ships, but in 1856, following an explosion caused by the ether in the port of Bahia, the commericalization of steam-ether binary motors was abandoned.

Towards the end of the nineteenth century, some small boats were made powered by engines that used boiling petrol in place of steam. The most well known of these boats were those built by Frank W. Ofeldt (the “naphtha launches”), which entered into production starting from 1897. The working fluid of the engine was naphtha, which was also used as lubricant for the moving parts and as fuel for the evaporation of the working fluid. These launches enjoyed a moderate  commercial success thanks to a U.S. law which prescribed the presence of a qualified engineer on board if the engine employed high-pressure steam. The regulation did not apply to boilers for other types of vapours.

However, it was not until the 20th century that ORC technology was developed intensively.

Between 1961 and 1962, Harry Zvi Tabor and Lucien Bronicki built various Rankine engines using monochlorobenzene at a maximum temperature of 140–150 °C, and with power capacity in the 2–10 kW range.

The first geothermal binary ORC power plant was installed in 1967 in the Kamchatka peninsula of the Soviet Union. The working fluid was the refrigerant 12, and the power plant featured a gross power of 680 kW. The thermal energy source was geothermal water at low temperature (80 °C). 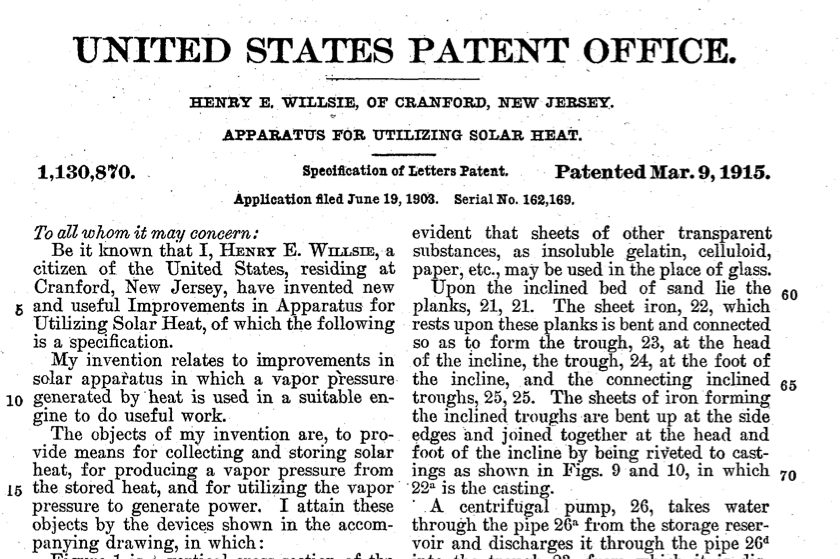 Figure 1 - The patent of H. E. Willsie, filed in 1903. It reads: "The invention has as its aim the improvement of a solar system in which the pressure generated by heat is used in a suitable engine to produce useful work"

In the field of thermodynamic conversion of solar energy, between 1902 and 1908, sulphur dioxide, ethers and ammonia were used by Willsie and Boyle as working fluids in Rankine cycles. Numerous irrigation solar units of different power sizes were realized, using ORC engines during the period 1970-1980: the 150 kW plant at Coolidge (Arizona) in 1979;

Memorial Institute); the 19 kW solar pump at Willard (New Mexico) in 1979 realized by the Sandia National Laboratory; the engines of the French SOFRETES; the 32 kW solar pump in Bakel (Sahel, Senegal), and the engine of 3 kW realized in 1983 at CNEN (Trisaia, near Rome, in Italy). It is also worth recalling the 12 kW low-temperature solar plant at Borj Cedria in Tunisia (1982), and the high-temperature 40 kW solar engine (300-340 °C) realized in 1980 and using a perfluoro-carbon as the working fluid,  with a four-stage axial turbine and a demanding regenerator. Both the engines were of Italian design.

Italy boasts a long-standing tradition in the development of thermal Rankine engines using organic fluids. Between 1923 and 1931, Tito Romagnoli built a 1.6 kW engine using hot water at 55 °C as the heat source and chloro-ethane as working fluid. Between 1918 and 1922, Prof. Mario Dornig (at the Istituto di Fisica Tecnica of Pollitecnico di Milano) and Prof. Luigi d'Amelio (at the Regio Istituto Superiore d'Ingegneria of Naples) were among the pioneers who proposes the use of working fluids other than water in small solar engines based on Rankine cycles. 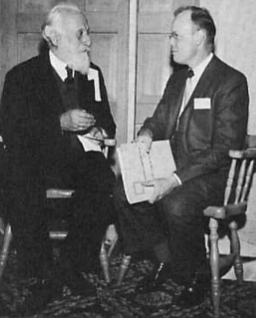 Figure 2 - Mario Dornig (on the left) with Donald L. Benedict during the World Congress of solar energy organized by the Association for Applied Solar Energy (AFASE) in Arizona in 1955 (Image courtesy of Cesare Silvi, from The SOMOR solar pump: a rediscovery of an Italian invention of the beginning of the twentieth century, published on www.gses.it, December 2009). 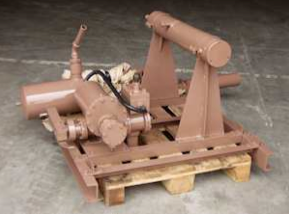 Figure 3 - The body of the SOMOR pump, which was  transferred from the Museum of Science and Technology in Milan to the Museum of Industry and Labour of Brescia in 2005 (Image courtesy of Cesare Silvi, of www.gses.it).

In 1935 Professor D'Amelio, for example, carried out detailed studies about the design of a 4.5 kW engine, using ethylene chloride as the working fluid (evaporation temperature of

40 °C, condensation temperature of 23 °C), with the purpose of realizing solar pumps in Libya. An engine prototype (using geothermal heat) was realized on the Ischia island in 1940. 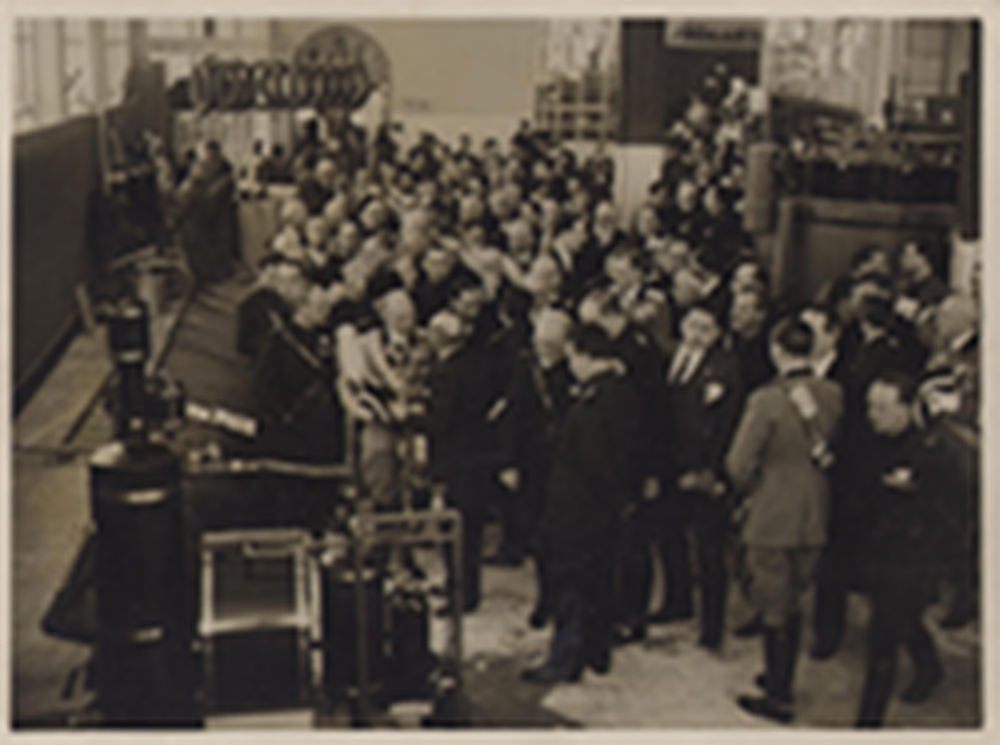 Figure 4 - The pump of Andri/Gasperini on show in Turin around 1935 (Image courtesy of Cesare Silvi, of www.gses.it).

A solar pump powered by a sulphur dioxide engine (a fluid then used in the refrigeration industry) was built by Daniele Gasperini that, in collaboration with Ferruccio Grassi, founded the SOMOR company (SOcietà MOtori Recupero del calore solare e del calore perduto), attempting to commercialize the pump. The motor-pump was presented in 1955 at the Solar Energy Fair at Phoenix (Arizona) too.

In the newspaper The Desert News—November 15, 1951 (the oldest daily newspaper published in the state of Utah, at Salt Lake City)—one can read the following brief but curious note:

The Sun Could Supply Electricity, by A. De Montmorency New York, November 14—A new Italian invention will permit each house to generate its own electricity without any expense of fuel, simply by using the sun’s energy. A dispatch from Milan to informations of Madrid reported that Prof. Mario Dorning of that Lombardian city had built with the help of Daniel Gasperini, an engineer, a solar engine capable of producing 10 kilowatt-hours daily. Three such machines have been sent to Egypt for a tryout

The first patent of the engine of Gasperini is dated 1936 and deals with an <<engine working by solar thermal energy, but able to exploit also worthless fuels and agricultural wastes>>. The first engine was exhibited in Turin (Italy) in 1935 and in July 1936 at the Fair of Tripoli (Tunisia). At least fifteen pumps were sold and experimented until the end of 1960s, in Italy, in the United States, in some African countries and in Costa Rica.

However, the so-called Italian School, which significantly and systematically contributed to the development and study of Rankine engines using organic fluids was established during the second half of the1960s at Politecnico di Milano. Its founder was Prof. Gianfranco Angelino, with Prof. Mario Gaia and Prof. Ennio Macchi, first as his scholars, then as colleagues and friends. Between 1976 and 1984, with the financial backing of various institutions and private companies, the group designed and contributed to the realization of fourteen ORC power plants, spanning the power range from 3 to 500 kW, and for the conversion of various thermal energy sources (solar energy, geothermal fluids, industrial waste heat, fossil fuels). 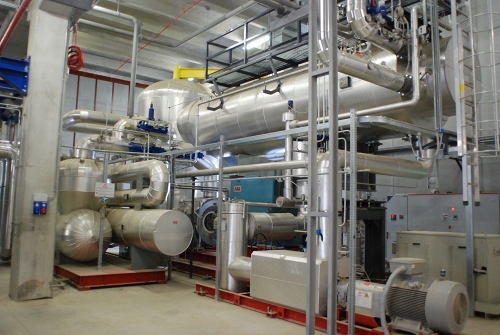 Today ORC power systems are successfully employed in growing numbers for geothermal and biomass power conversion and have reached full reliability and competitive cost. New and exciting applications drive much research and development efforts, paving the way to an even more prosperous future for this renewable energy technology.